The bicycle wheel is a mathematical marvel, a near physical impossibility in terms of strength and weight. It's all in the spokes, as they say. Building wheels, therefore, seems like it should be a straightforward, scientific proposition: put the spokes where they belong, get the tension even, and KABOOM! A shark eats it! Oh wait--that's my favorite recurring nightmare. I meant KABOOM! You've got a wheel!

Perhaps you can anticipate where I'm going: building a wheel should be a straightforward, scientific proposition, but sometimes it takes a discouraging amount of trial and error. One of our favorite SuperCustomers brought in a vintage Campagnolo Record hub (complete with an authentic patina of paleo-grime) for us to build into a new wheel. He brought in a similarly ancient Weinmann Concave rim. How ancient? Tough to say: Weinmann made a mess of them from late '70's to mid '80's. For their time, they were fantastic: they're super strong on the radial axis, fair to look upon, last for a long time, and are generally straight and round out of the box. You bet! Touring wheels! Modern wheel aficionados, however, would object that they're heavy, subject to torsional flex, and only single-wall (which leads to torsional flex).

Let's lace them up!

I measured the rim and hub, then cut me some spokes. 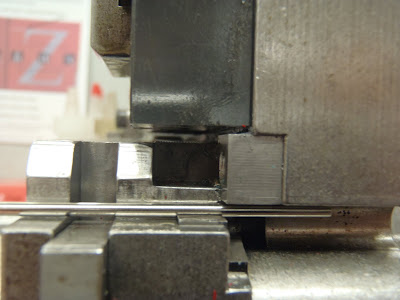 Then I started putting the bits 'n pieces together. Normally, I build a wheel by lacing drive-pull, non-drive-pull, drive-push, then non-drive push. It's the easiest way I know and I can do it while enjoying many of the benefits of sleep. 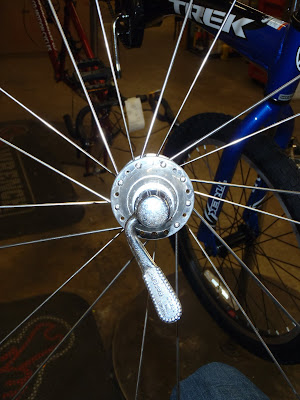 Not very far into the project, however, I came to the conclusion that Tullio Campagnolo and Dae-Jung Weinmann very clearly did not collaborate during the design phase of these two components. In fact, it seems they were having some sort of spat, glowering over their drafting boards, muttering tart epithets about one another from beneath knitted brows. "I'll show him, that rump-nursed stinkard," each hissed concerning the other through clenched teeth.

How could a rim and hub be non-compatible? I could never have guessed, but they pulled it off. I planned to document the build with the camera, but gave up on the pictures portion when it became clear that lacing it like a normal ole wheel wasn't going to work. How do you mess up drilling spoke holes on a hub?!? And how do you offset the holes in the rim backwards?!? Ugh.

You can maybe sort of see it in the above picture: every other spoke hole in the steeply beveled hub flange is counter-sunk, apparently so the head of the spokes can sit in the flange. Bad idea! Especially when the spoke holes in the rim were offset, but drilled the opposite of every other rim I've seen: instead of (from the valve stem, moving to the right on the inside of the rim) down-up-down, these were up-down-up. I have an old Dunelt with rims drilled that way, but all modern rims are down-up-down if they're offset at all. Combine backwards rim drilling with fiddly hub flanges... Let's just say it took three tries to get it laced where it will work, but it's tight, round, and straight, so SuperCustomer ought to be happy!

On a slightly different note, we had a hale and hearty winter warrior come in with what seemed to be a routine broken spoke on a mid-to-low budget wheel. Normally spokes give out at the elbow, but in this case... 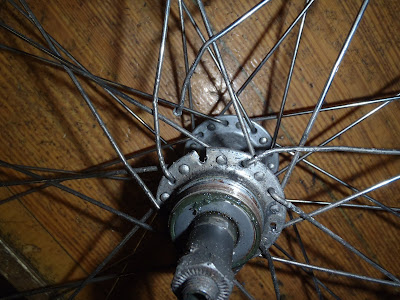 You can see that the chain had wandered behind the freewheel and caused some turmoil. It's surprising to see a hub flange give out before a chain-chewed spoke!

First one to answer it correctly in the comments section gets a full-ride scholarship to an upcoming wheel building class!!! If you win, I'll have my people call your people and you'll be on your way to developing a highly rewarding skill.

The Question: Who first patented an aluminum bicycle rim, and in what year? Hint: It was neither Kermit Weinmann nor his brother Yeorgi, nor anyone by that surname. It was some other dude from not Germany and not Prussia.

Another hint: he was from Wisconsin!

The answer was Nels Johnson, who filed a patent in 1921 for a solid-core Aluminum rim. The patent was granted in 1923. Thanks for playing!
Posted by Chris at Wednesday, December 15, 2010