You there! Sit up and take notice! If this is a good time for you, that is!

Tonight's ride was memorable in that we had pretty much every location of the business represented: Freewheel Mobile's own Thadwick Cialek; West Bank's Tyson Acker; Midtown's John Bemel; Ben Erickson from the front office; and me (Chris) from Eden Prairie.

We talked shop. We talked life. We talked trash. We took bad lines. We cleaned rock gardens. We accidentally skidded once or twice. We awarded style points. Most of all, however, we reminded ourselves and each other and other folks around us why we're in the bike business: we love it.

Perfect conditions and perfect weather (maybe just a touch on the hot side at the start) combined with one of the best trails around are just icing on the cake, but honestly, we could have fun riding around an old city dump at nine miles per hour and getting dizzy from all the turning... oh wait, we do that at Theo Wirth. Yep, we have fun there too!

I've been told that people don't read anymore, and that a picture is worth 1000 words, and that I look like I'm Irish, and that my bike creaks. It does creak, but I'm a mechanic, so I know why it creaks, and if I'm not worried about it, you shouldn't be either, so there! And I AM part Irish! And you're reading this, aren't you?!? But anyways, here are thousands of words worth of pictures. 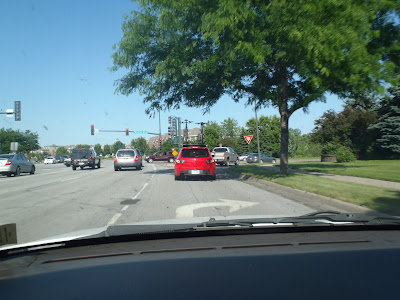 First you have to GET there. At 5:00 on a Wednesday, it took over an hour.
That's the Thadmobile in red. 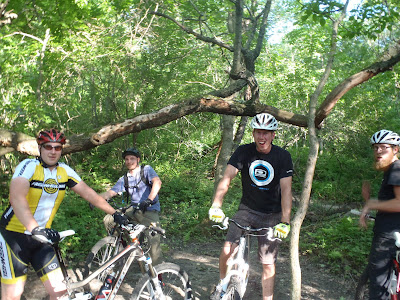 So this is us, minus me. I'm busy being the bad photographer. 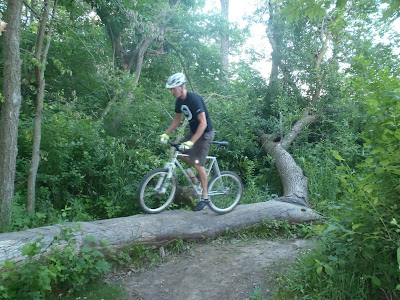 Tyson, saving it despite a shaky entry.
Note the incredible seat tube on that custom Waterford! 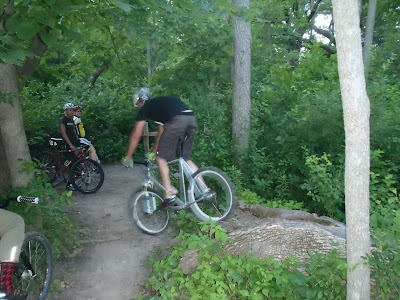 And he sticks the landing!
That's John Bemel's stunning red and black sock in the lower left corner. 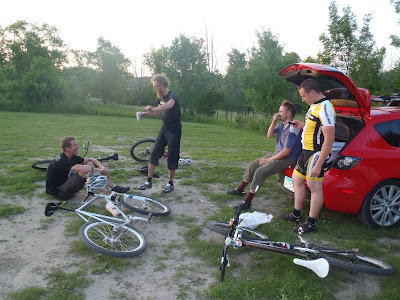 Ben, telling an animated story. Thad had apparently heard the story before. 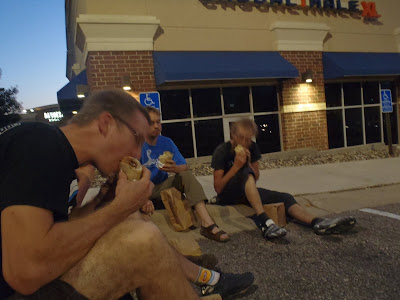 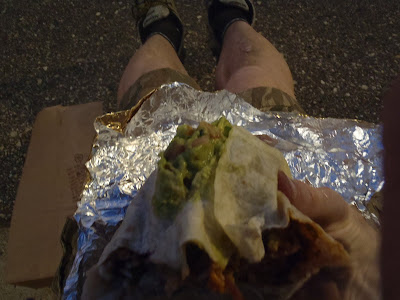 Oh drat my luck! Guacamole blowout, and I forgot to grab a spoon!
Why did I get out of bed this morning?!? 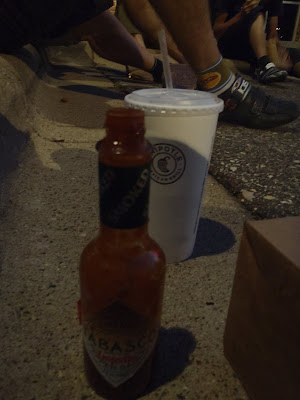 Don't worry, I took it back inside when I was done with it.

Superbe *or* Wizards of Suspension!

In my opinion - the side pull brake is the pinnacle of bicycle component design. They aren't the easiest to adjust, the most powerful or flashy, but something about the simplicity and effectiveness of the design makes me smile.

With a few minutes of their day anyone can figure out how to disassemble, clean and reassemble a pair. Adjustment takes a special wrench, but even then it's just a turn and a tug to get them in the right position. Their form follows their function, but who among us is immune to the charm of satin finish? Now, though, dual pivot and the allure of carbon fiber have taken hold our collective imagination and the side pull has been relegated in all it's glory to the cheapest of brakes, mass produced in Taiwan with not the love or respect the design has known. They have immeasurable beauty inside and out - well worth the hunt for a decent pair from the 70's, 80's or 90's.

It was to my surprise that sitting on BRose's countertop the other day I came to find a pair of Suntour Superbe awaiting an owner. Probably lost in some bin at the cave which was his old home, now they sat with their satin glow. I picked them up and wondered how they got to this location. You see, BRose isn't known for simple...

Step back into the bowels of the Shockspital and you'll find forks, components of all anodized colors and shapes, frames in various states of repair, tools which defy the imagination. It is a lair of wizards and magic, ladies and gentlemen. With Dave Vance at his side their combined knowledge borders on the ridiculous - there is no problem too nuts for them to tackle. Just walking back into the haze of technical babble and disc brake fluid is enough to set even the most serious mountain cyclist into a frenzy of joyous babble.

BRose has set out to make the mystery of suspension and this 'mountain cycling' as simple to me as my beloved side pull break. Over these next few months I'll begin to spend more time with these two gentlemen and try to absorb as much information as possible. It's true, I've never ridden a mountain bike, but I'm going to do my dardest to try. What kind of spandex does one wear in the woods?

So here I stand, in the midst of this wondrous and mysterious land. Feeling almost as out of place as these brakes. Still, the handsome BRose and the wise and all powerful Dave Vance have something to offer and I'll do my best to relay my lessons on to you all.

It is with a heavy heart that I must leave my home in the cafe to the far off land of the Shockspital, but I'm sure my girl back home will be waiting when I return.

The Nature Vally Pro Ride is an awesome opportunity for several amateurs to realize the dream of riding in a real pro event. Thirteen riders from all over the US of A were randomly shanghai'd from regional events and smuggled sketchily into Minneapolis in perforated cardboard crates. They were allowed to bring their bikes, but Nature Valley supplied their kits. Those sprockets on the shoulder? Yep, that's us.

Which is to say, we have to keep their bikes running throughout the event. Golden Wrenchers Pete Hamer and Tyson Meyer have done this sort of thing before, so they took to the opportunity like a chicken watching a card trick. At any rate, these are amateurs who are being treated like professionals, and part of that treatment is bicycle kindness, Golden Wrench style.

Last year we sponsored the women's team, and I personally worked late into the night on a bike that had been ridden into the ground. It didn't shift, the brake pads were more-or-less shot, the rear wheel had a bad hop in it, and the chain was worn out. Peel the tubular back, scoop out the fossilized tubular glue, find the right wrench, true the wheel, ghetto-patch the glue, good as new! Run all new cables plus new housing at the derailleur loop, presto! Write an inspirational message on the bar tape in Australian, yessiree! I happen to speak a bit of Australian: that's how I'm able to understand Andrew the Shimano Tech Rep. In fact, I translate for some of the other guys who frittered away their high school years on Donkey Kong and riotous living.

Anyways, in the frenzy of trying to get to her first professional bike race of her amateur career, one of the athletes forgot her shoes at the host's house. Now, this was the St. Paul crit, and if you've ever tried to get into or out of St. Paul at 6 PM, you realize that shoes in St. Louis Park (for example) would be inaccessible. She was determined to throw down in her running shoes, but we found another way!

Jake, the General Mangler, has the exact same size feet that she had!!! and he carries his road shoes around in the back of his car!!! and his car was only slightly further than a comfortable distance away!!! but nothing he couldn't cover on a borrowed bike!!! and Pete's bike was just sitting there!!! so off he went!!! and back he came!!! and most of his cleat bolts were not stripped or seized, except for that one!!!

Not to make it more dramatic than it needs to be, but we managed to get the shoes from Jake's car, get the ratty old cleats off (including one stripped bolt), install some brand-new Shimano SPD-R cleats (crookedly), and install them on the athlete at the starting line. She was only about 5 seconds late leaving!

Well, her race went to pieces on her. After she caught back up to the group, a crash in front of her forced her to unclip, and she was never able to clip in again. Heartbreaking, especially considering how hard she worked to get there. She was glad to have the absolute worst experience of her cycling career behind her, and if nothing else, we were glad for that as well.

So that was stage two. There were more stories I wasn't privy to, and I heard it through the grapevine that our man Timothy Rugg put on a show for the fans at Stillwater, and went home with a Most Aggressive Rider jersey (with some sprockets on it). He's going somewhere and could use some good fans!
Posted by Chris at Friday, June 17, 2011

Choose from Trek Remedys, Hi-Fi DLX's, EX 9.9's, and others! With these proven suspension designs, you'll be laughing at Murphy's hand-hammering tendencies. You will dive into the "Berm of Suck" and laugh aloud at the wrist-shattering braking bumps. You will slice through the random rock garden and laugh aloud again. You will hit the big, partially-concealed ruts in the parking lot left by high school kids whipping donuts in small pickup trucks and laugh aloud. Your voice will be hoarse from all the laughing aloud that you will do.

Oh, and join us for food and refreshments afterwards too.
Posted by Chris at Monday, June 06, 2011

Let's have it out: clearly he had maliciously modified his bike for what may be considered an unfair advantage over his hapless competition. One of these "modifications," a derailleur pulley shaved down for extra aerodynamic advantage, he even boasted of on his own blog! The nerve!

In addition to the shaved-down derailleur pulley (saving probably eight grams of crucial rotating weight, plus eliminating the rotation), this area mountain biker was also using ultralight brake pads which consisted of only the metal backing plate. In other words, he was willing to risk life and limb in order to save about ten grams of braking material. Is this truly the cost of winning, and if so, is winning to be done at all cost?

The final straw was revealed when we removed the crank arms from the nondescript mountain bike and discovered that, in direct violation of literally several ethical somethings, he had lightened up his bottom bracket by removing several of the bearings. Certainly one could find wiser ways to save a few grams! 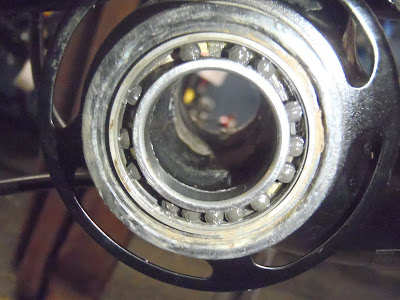 There are a lot of gaps in this smile.

I dunno. Maybe these fast guys just think differently, but this seems to be taking things a bit too far. We are thinking about having a sit-down intervention with this fellow before he starts sawing out his down tube, ventilating his handlebars, or drilling holes in his chain rings.
Posted by Chris at Sunday, June 05, 2011