If you follow this blog at all you'll notice that we do a lot of suspension training and suspension repair work. On Thursday June 24th we had yet another suspension training clinic. This time Dave Meadows (seen in the black XO shirt below) from Sram selected Freewheel Bike as part of their dealer tour. He came all the way from Colorado Springs to walk us through a Reba rebuild. 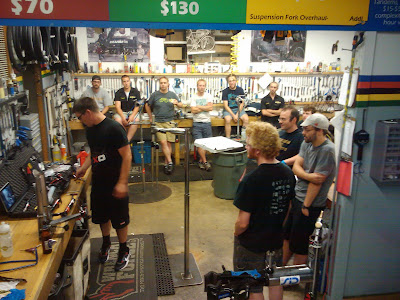 For many of us this was all review but we didn't mind getting together and having a good time. 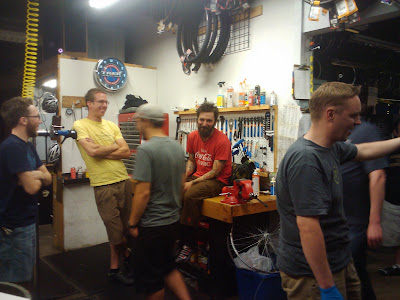 But it wasn't all fun and games. Bob, our Assembly Supervisor, got some hands on experience. There's nothing like trying something for the first time as your peers stand around and watch, waiting for you to make a mistake to laugh at. Luckily for Bob he didn't give us that satisfaction. 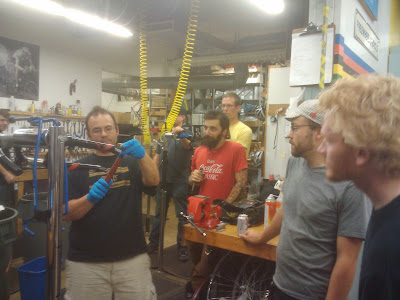 Graham got to inspect a rebound damper up close. 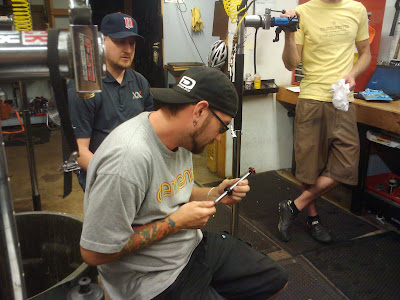 We got to see some cool new technology, notice the i-pad. 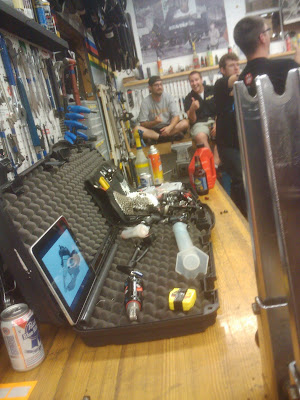 And there were some fancy diagrams drawn on a pizza boxes. 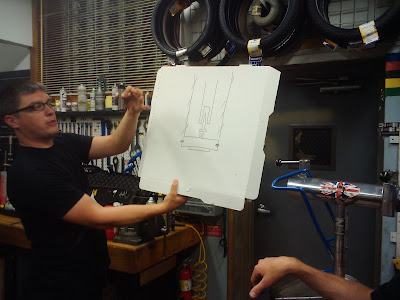 The first person to send me an e-mail at peteh@freewheelbike.com with the name of the Rock Shox technology that Dave drew on the pizza box will win the Rock Shox shock pump in the picture below.
6/28/10 Edit: We have a winner. The answer is; "Motion Control damper". Thanks for playing. 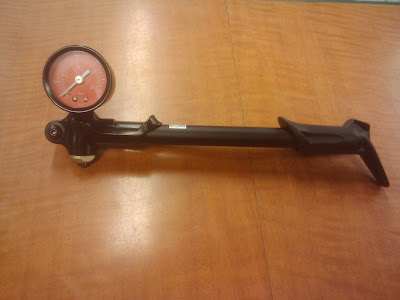 Email ThisBlogThis!Share to TwitterShare to FacebookShare to Pinterest
Labels: suspension

As a bike mechanic, I have tended to resist progress in my own bicycle library simply because I get my fill of working on bikes at work. This mindset has come as a result of a few less-than-stellar experiences with overly-complicated equipment.

In 1998 I bought a Diamondback V8. It was Richard Petty blue and red, with a Stratos shock on the back and a leaky first-generation SID on the front. It had first-generation SRAM ESP shifters, a super-short seatpost, and an awful WTB saddle, as well as a pair of Time ATAC pedals that I'm still using on one of my bikes. It came stock with XT cranks and tipped the scales at 24.8 pounds. By today's standards, it would still be a light, good-handling bike, and I put a few thousand miles on it over the course of the season.

Several years and a few steel hardtails later, I lost my inhibitions again and bought a 2003 Trek Fuel 98. Once again, I rode the thing into the ground, but this time it was my Alpha bike for three seasons. I wore out rocker links, beheaded pivot bolts, lost my lockout lever, toasted several sets of bushings, and popped half a score of early tubeless tires. This bike still sees some limited duty and still goes fast in the woods, but is now affectionately called "Mr. Sloppy" due to its handling characteristics.

I bought a Gunnar Ruffian single speed in 2006 and put the Trek away. Then I got a rigid fork. [fast forward sound]

Before Afton 2009 I did two laps of the race course with my beloved rigid fork and my wrists and shoulders said "that's it." They wrote me a long, sternly-worded manifesto in which they basically said that they felt they could do better elsewhere. In response, I dug out a 2003 Manitou Skareb that was serving a life sentence as spider habitat under my workbench. During the race, the fork, which had never seen any maintenance in its career, sprayed a bunch of oil out of the top seals onto nearby surfaces, such as me. Additionally, it was making weird noises, the lockout didn't work, and it felt kind of sticky. Off it came, and back under the bench it went, to the sustained applause of the spiders.

As I was gearing up to do Afton again this year, I remembered that suspension was a vital part of my campaign last year. Three laps with suspension was rough: there was no way I was going to do four laps without! The fork had not fixed itself, however, and the spiders have not been trained to work on Manitou stuff, so I had to do it. Grrrrrr..... I HATE WORKING ON MY OWN STUFF!!!!!

But, it turns out that fork service, while tedious (even Manitou admits this!), is good for your fork. It reminded me of the descriptions of veterinary surgery in James Herriott books. I managed to get most of it back together without dropping many of the pieces and without scorching anything with contaminating fluids. The old oil came out an opaque brown, the new went in a translucent purple. New bottom-out bushings replaced crumbly old ones. The old top seals that spewed oil on me were replaced with non-oil spewers. I also managed to dig most of the dirt (likely from Afton) out of the various nooks and crannies in the lower casting. Yup, it's lighter now.

When I was done, I gassed it up to 140 pounds and honched on it a few times on the floor. It made no slurping sounds, leaked no oil, and locked out dutifully. And it was smooth! On the bike, it was smoother! Yikes, it moves! This is how it's supposed to feel, apparently. I had never known it to feel as good as it did with fresh fluids and bits: I kept hitting things hard with my back wheel because I never felt them with the front wheel!

The service manual wants me to check the oil in the air piston every 6-8 weeks because the oil can "dissipate over time and then you may experience some air leakage and increased stiction in the fork movement." The manual also wants me to eat lots of vegetables and get plenty of sleep. Most manufacturers tell you to do some sort of regular maintenance every so often, usually based on ride time. For example, Halson required you to draft a haiku and read it to your fork once a fortnight. [Needless to say, this is the reason that Halson Inversion forks did not overwhelm the industry.]

Fork maintenance is a big deal! If you've been riding around on a sticky, leaky, slurpy, non-functioning fork, you've been missing out on performance. The fluids in there get contaminated and break down from heat. The soft bits deteriorate. The other bits crave attention and will become sullen if neglected.

Do yourself and your bike a favor and have this towering yeoman look at your fork. 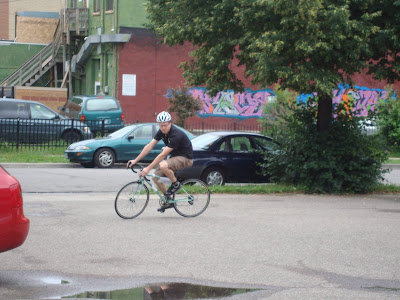 His name is Tyson. He doesn't fit a 48cm road bike very well, but he has made suspension awesomeness his life's driving ambition.

Edit 6/23/10 2:40pm: After reading Chris' blog I decided to run a suspension service special. Our suspension service packages are $10 off now through June 30th or you can win a suspension fork tune-up (labor only, you have to pay for parts) by being the first person to email the correct answer to the following trivia question to peteh@freewheelbike.com.

What unique design feature allowed Halson to use cantilever brakes on an inverted fork?

6/24/10 1:26pm We have a winner! The answer is that they had to make slots in the upper(outer) tubes for the cantilever bosses to slide up and down. Thanks to everyone for playing.
Posted by Chris at Monday, June 21, 2010

Email ThisBlogThis!Share to TwitterShare to FacebookShare to Pinterest
Labels: suspension

I recently got word that a fellow from another shop had his bike stolen. It is a 2010 Fisher Superfly 100, serial #WTU099T149. I don't know what kind of reward he's offering, but if you happen to see this bike, let us or the guys at Penn Cycle know. The bike was stolen up in Duluth.
Posted by Chris at Tuesday, June 15, 2010

I finally built up this wheel that I've been scheming for months. You ever get some crazy, change-the-world idea in your head and life is too busy to execute it? That's how this went. I'm not sure how strong it will be, or whether it will flex like Spinergy mags, but it was a fun project.

I had an old set of XTR FH-M950 hubs laying around after the Mavic 517's they were laced to gave way. (Two-cross with Revolution spokes and aluminum nipples. Raced them for 6 seasons before I wore through the sidewalls.) They were begging me for redeployment, so I said "OK, you win" and bought a pair of Alex Adventurer rims.

If you haven't familiarized yourself with Alex Adventurer rims yet, you probably should. They are the most cost-effective training rim out there. They build up almost perfect, have eyelets and machined sidewalls, and are a true double-wall. "RACER'S EDGE" glares at you prominently from the decals, but at 540 grams for a 26" rim, they're about a third of a pound on the chubby side for number plate duty. But for beater wheels, they're a great option!

My idea was this: crow's foot lacing only works with spoke counts in multiples of 6: 24 hole, 36 hole, or 48 hole drillings are the only conventional ones that work. Otherwise, there is a hybrid crow's foot that looks pretty cool and works on wheels with multiples of 8 (which is most of them, except 28 hole). I've got these sweet hubs just pining to be used again, but they're 32 hole. So I thought about it for a while, drew some pictures while daydreaming in service meetings (sorry, Pete), and figured that if I took the crow's foot pattern, but used two adjacent radial spokes, crossing spokes would be three cross length and tangent at the flange. It would probably be a nice, strong, stable wheel, and it would be something different. 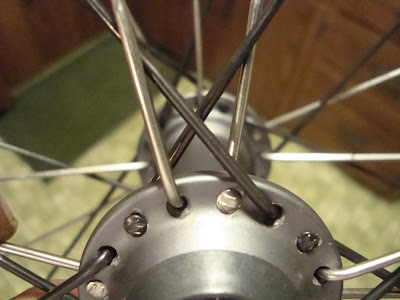 At last I had time to execute it, so I cut some spokes on the handy Phil Wood Spoke Cobbler: 16 radial (253 mm) and 16 3X (265 mm). I made the 3X spokes black, thinking it would look all awesome and stuff, but it wasn't as striking in appearance as I'd hoped. It looks more like I patched a disaster back together with some franken-spokes. That's OK, we'll call it theft deterrent. 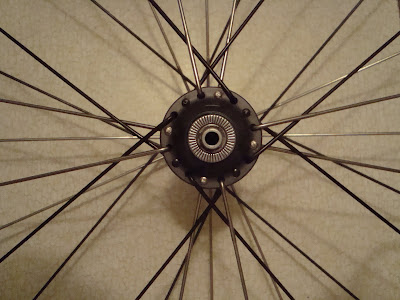 Lacing was a snap. I did all the radial first, alternating heads in and out, and then ran the crossing spokes inside the radials. This was a somewhat arbitrary decision, but it seemed like there was better bracing this way. Plus, if I bust a spoke, it won't require a major tear-down to get at any of them. Given the type of service this wheel will see, this is a good thing.

Our Basic Tune-Up and our Comprehensive Tune-Up are 20% off now through June 20th.

Hurry in while we still have short turnaround times.

Our Midtown location is running about a three day turnaround on tune ups and our West bank location is about a week out.
Posted by Pete Hamer at Tuesday, June 01, 2010