So, last summer a few of us Freewheelers decided that it would be a good idea to have a weekly off road ride at Murphy Hanrehan Park. Over the course of many weeks, we gained more and more riders. Eventually, somehow, Murphy got the nickname of Hammerhands (get it? Hammerhands = Hanrehan)... there is an official mascot, but, to avoid lawsuits, I will not post it here (Imagine "Fighting Irish" with hammers for hands).

What we have in store: (1) A great ride! We are out to have fun and enjoy the summer trails. This ride is open to any level of off road rider. (2) Socialization post ride. Continuing our tradition, we will be roasting off meats and vegetables in the parking lot and will have refreshments available as well.

We will start this week (5/25/11) and go right up till the time trial series (also on Wednesday nights at the end of the summer, stay tuned for more info). Meet in the trail head parking lot off Hanrehan Lake Dr at 6pm. We won't ride if the trails are wet (check trail conditions at MorcMTB.org).

See you out there!

Although it is exciting and fun, cycling is an inherently dangerous sport: Freewheel Bike and its representatives are not responsible in any way for any perceived or actual injury before, during, or after group rides. Please take personal responsibility for your own safety. Helmets are required for all rider.
Posted by Thad at Sunday, May 22, 2011

We're officially extending a hearty Golden Wrench "WELCOME ABOARD, YOU FELLOW!" to Brian Rose, the gentleman-provocateur Alpha wolf from Shockspital. He's a disarmingly jovial fellow who lives and breathes bicycle history. He knows his retro bikes, and he knows his modern bikes, and he knows his own bike, and can often be found discoursing on the strengths and weaknesses of bygone designs.

And to top it off, the man himself rides an AMP fork: not the single-sprung unit, we're talking the dual-damper, titanium-legged fork that they made right before they bowed out of the industry. That's retro-bike nerd for "legit," as many of our readership are well aware.

Offically, we welcome you, Brian Rose, to the usually-temperate basement of the Midtown Bike Center! 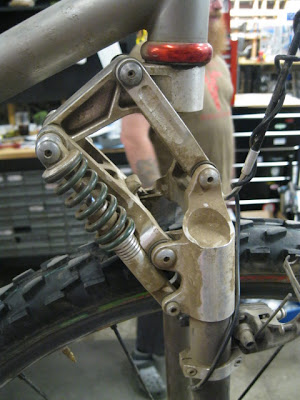 The man, obscured by his fork
That's our official position. Privately, however, we're a bit worried. When he actually began moving into the Midtown Bike Center, he brought with him several enormous tool chests, some housewarming decor, his own bad self, and an extensive omnium-gatherum of suspension oddments dating from my earliest memories. Red plastic bins full of bicycle suspension archaeology form a neat little bunker where BRose can work his magic. 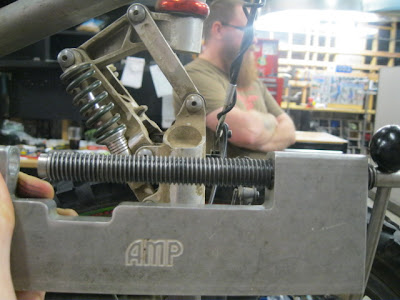 Instant Credibility! This tool does nothing that a well-wielded hammer and a drift punch cannot, but it says AMP on it...

The trouble is not merely the presence of the bins, it is that we have to catalog and inventory their contents. The bins themselves are large and heaping-full, and they are numerous. Plus, some of the parts have long since celebrated the tenth anniversary of their parent company's closure. It's going to be a challenge. 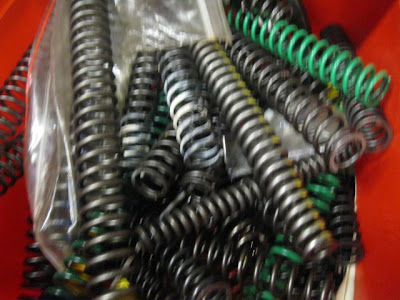 A lively box of springs: one of many such bins in the collection.
Lo, an air can from a Stratos shock! Behold, a damper from a Noleen Smart Shock! Begorrah, if that isn't a Boxxer spring! And what is this beautiful thing? Nope, I dunno. I'll have to ask.

Well, officially, we're going to give him the benefit of the doubt. He's got a pile of stuff to do: there's a Lefty from New Mexico, a Fox Alp 4 from Illinois, an old SID from Massachusetts, a lineup of local stuff, and a bunch of conversations to keep up on. As long as those bins don't start multiplying, we should be fine...
Posted by Chris at Tuesday, May 17, 2011

Here in the Upper Midwest we occasionally get some pretty spectacular thunderstorms. Like tonight, for instance. A tiny little storm that barely registered on regional radar still managed to make me run into the house for the camera... 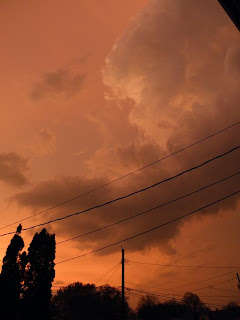 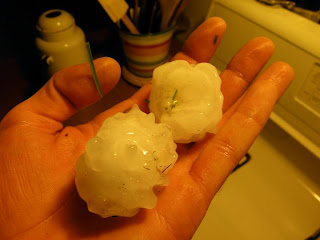 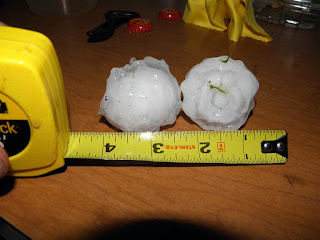 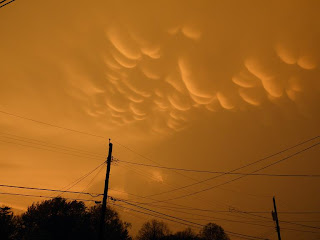 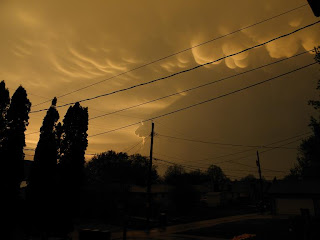 Check out the mammatus action on that sucker! And has anyone ever seen bigger hail? I admit I have not.

Email ThisBlogThis!Share to TwitterShare to FacebookShare to Pinterest
Labels: weather

We want to service your suspension.