The Performance Trap and How I Escaped

Self: "I have just received a paycheck from my employer. Time for an upgrade."
Bike: "You know, you'd be faster if you just rode more and ate less."
Self: "Hush your noise, you!"

So I look at my bike, the Gunnar Ruffian CX Hybrid (Don't tell Richard Schwinn I did this). It looks like this: 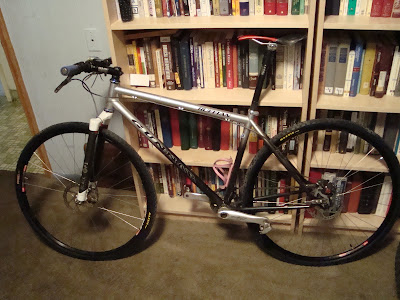 The trained eye of the Golden Wrench readership will quickly spot the glaring defect in this otherwise harmonious machine. No, I intentionally put 700c wheels on a 26" bike, I'm talking about the other defect.

Those particular grips had hit just about every tree on the Theo Wirth loop. Plus, they're ESI silicone, so they do wear out eventually (long after they stop smelling like Silly Putty). They were ripped, shriveled, stretched out, perma-stained, and frankly, a bit smelly. So it was time for a change.

I started by installing a narrower handlebar and a stiffer stem, which ended up taking about 70 grams off the front of the bike. Rather than bring the tired ESI grips out of the basement graveyard, I thought I'd go pro and wrap my bars with road tape.

PROS:
1. Yeah! Awesomeness! I have seen other people do this, and they happened to be awesome!
2. Light! I will be high performance super-guy and probably beat people only because of my road tape grips!
3. Colorful! Children will learn my name and cheer for me at CX races!
4. Cheap! Leftovers!
5. Light! I will only with difficulty keep the front wheel on the ground!
6. See #2, #5 because they are the primary reasons, and really all I was concerned about!

CONS:
1. Sends shooting pains up from hands to shoulders in rough terrain (which is everywhere, I soon discovered)! Yay, now I can easily detect rough terrain!
2. Tears easily! Yeah! I get to do maintenance on my GRIPS!
3. Colorful until dirty! The children actually began to cry because they thought I was a bum on a bum bike, but their parents gave me some money, so it wasn't all bad!
4. #1 is an awfully powerful consideration! My hands really hurted! I could not shop for groceries with a cart without fighting back tears!
5. Will not stay put, even with extreme measures, such as double-stick tape, electrical tape, arc welding, staples, threats, ocelots, mermaids, brown sugar, two eggs, a teaspoon of vanilla, a cup of whole-wheat flour, and a ripe banana. Bake for twelve minutes at 450 degrees, or until a nice crust appears.

In other words, it was the worst mistake of my adult life. Worse than paying full retail for books that are public domain on Google Books now.

Oh hands, I was wrong: will you forgive me?

Well, this relationship was going nowhere in a hurry. It was time to be done with it, but for some reason whenever I visit the grip rack at work in my own self-interest, the token pair of ESI grips that we stock (black of course) is always sold out. So then I have to make a decision: order some new ones in a ridiculous color that matches nothing, such as Kermit the Frog Green, or continue to damage my hands until they are non-functioning pork chops at the ends of my limbs. The first will make me wait a week, the second would render my hands useless because I don't like pork.

The above sounds were coming from around the corner, where Jason was installing a brand new set of Oury grips on his bike. His old Ourys, after two seasons, looked like new except for rips in the ends. Apparently, some other employees at Freewheel would put 1/4" bearings inside his handlebars through the little rips, and Jason's ride home to St. Paul would sound like *tinkitytinkitytinkitytinkity*. Jason's a rather manly dude, and would not have his bike go *tinkitytinkitytinkitytinkity* if he could help it, so he ordered up some crystal clear Oury grips to deck out his hypo-commuter. There are currently no rips in the ends of these grips for his evil coworkers to put bearings into (so we will have to take out his seatpost and put them in his top tube, I guess).

His old Ourys laid on the bench all sad-like saying "It's not our fault that your coworkers are evil! Look how well we've held up for all these years." They played the sympathy card really well, I must admit. I've always thought that Oury grips were ugly: they looked like something from a claymation motocross something or other. Plus, they seem to appeal to people with gorilla hands, where mine are more like rhinoceros hands (big with comparatively short fingers). I've also been told that they're for people with arthritis. But there they were, all sad and lonely. My hands still hurt from the ride in to work, all bunnyhopping curbs and catching air and stuff. I was ready for a change.

I asked Jason if I could borrow them and try them out on the Hybrid. He said "sure," or at least he loosed a well-crafted sentence at me that led me to believe that he meant "sure." Hopefully he meant "sure" because I don't want to go to jail. I installed them after work and rode home.

Now I have HAPPY HANDS! They just can't stop dancing! Anywhere I go, my hands start dancing like fools. I have to sit on them or put them in my pockets or bite them when I'm in public. Mostly because I'm of northern European descent and dancing just ain't our thing so much as pillaging and looting, but also because dancing hands often leads to institutionalization, and I have too much going on in life.

I was so excited to not have my hands turn into porkchops on the ride home that I checked out Oury's website! Wow, it sucks! But their grips make my hands dance! So I forgive them!
Posted by Chris at Friday, October 22, 2010 Links to this post

Word has been spreading quietly amongst industry insiders about the death of Andy Paradowski from Hayes Brakes. You may remember him from a couple of our older posts;
Getting Smarter
Please Try Not To Get Oil On The Carpet
Andy was a dedicated bicycle mechanic and all around good guy. Our hearts go out to his family and friends.

Andy is the guy on the right in the Hayes work shirt. 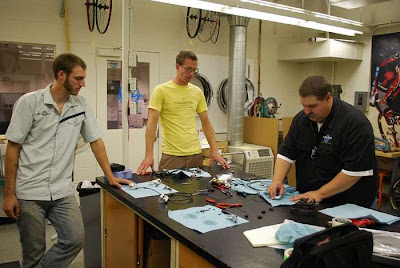 Posted by Pete Hamer at Wednesday, October 13, 2010 Links to this post

Thank You, such a simple thing to say yet it can leave a lasting impact on a person's outlook. I have been noticing something around the shop that has driven home just how important is to give and receive thank yous. The following photos are pictures of some of the thank yous that we have received over the years. They have obviously made an impact on us because we not only keep them (sometimes for years) but we often display them at our work areas.

These are thank you cards that Patrick keeps above his workbench at Check-In. 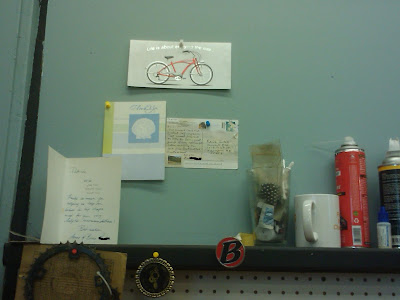 This is a letter that I kept in my tool box. 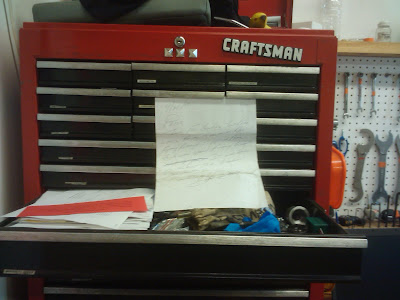 I noticed this letter in Stephen's office. It's from a customer that bought a new bike and found that the fit needed to be tweaked to more closely match her old bike. 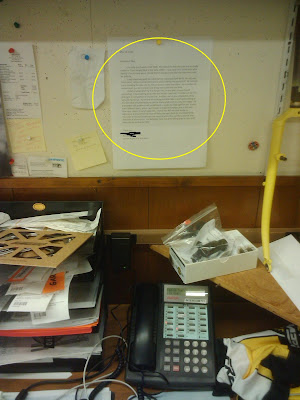 This has been in Kevin's office since I started working here about two years ago. 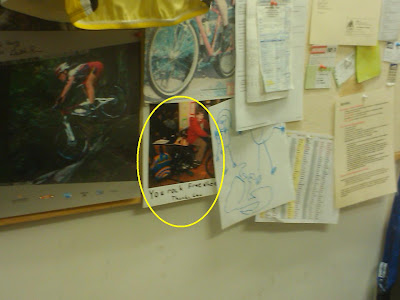 This is my favorite. There is a wall in the back of the store with where a bunch of Scout Troops wrote their thank yous to Marcy. I assume that she was teaching bicycle repair classes so that they could get their merit badges. Some are dated as far back as 1991. 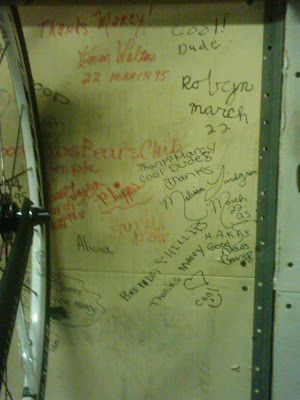 This is a post card that Tyson keeps above his bench. Apparently Chairman Bob approves. 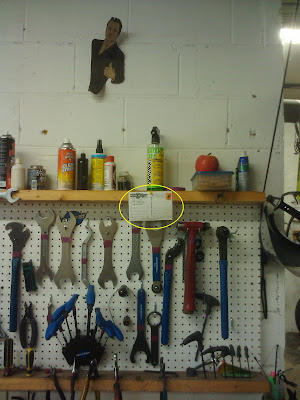 Most letters come via e-mail these days. I keep a folder of them. 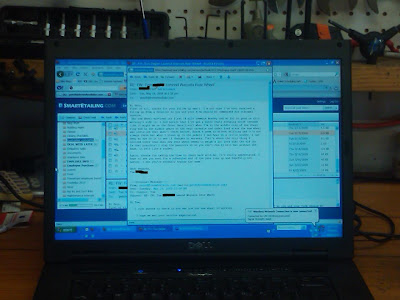 This post is not meant to brag about how great we are because the truth is, we do get some complaint letters too. While we don't like getting complaints we do appreciate when people make the effort to give us constructive criticism and a chance to redeem ourselves if needed.

So I'd like to say, Thank You, to all of our great customers. You are the reason that we love doing what we do.
Posted by Pete Hamer at Tuesday, October 12, 2010 Links to this post

Email ThisBlogThis!Share to TwitterShare to FacebookShare to Pinterest
Labels: Musings

Guess what my topic is today? That's right! Annual fork service. Annual suspension service, really. In all my work with suspension components, I occasionally see horrible, terrible, preventable things like this: 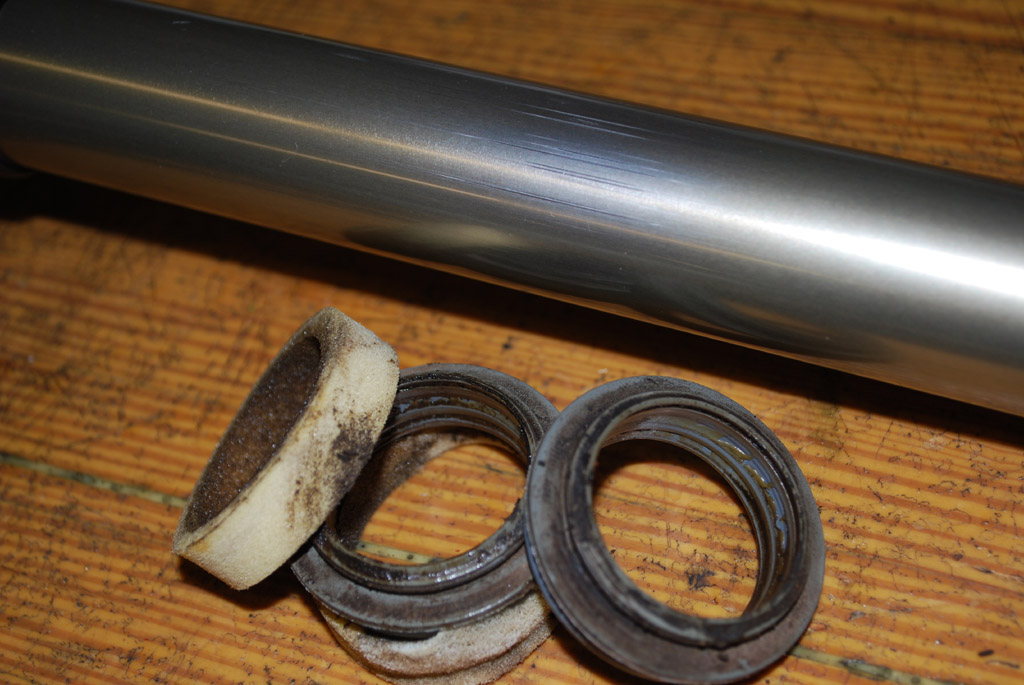 ...and it breaks my heart. This fork is essentially ruined, simply from neglect. Just look at all that dirt on the wipers and foam rings! And see how that dirt put huge scratches in the stanchions!

The job of those gray wipers (which you can see on your fork where the upper legs, or stanchions, disappear into the lowers) is to keep the dirt out and the oil in. But they can only do so much, and over time dirt works its way past them into your fork internals. If left there long enough, it can cause damage to the stanchions themselves, as seen above. Even with new wipers and a lot of cleaning, this fork will leak oil and ingest dirt at an accelerated rate because the wipers can no longer form a tight seal against the stanchions. Had this fork received regular maintenance (annual service!) it would be full of fresh oil and back out on the trail already. Instead it's going in the scrap heap.

So please, people, bring me your forks (and shocks) so this doesn't happen to you. Different manufacturers recommend different service intervals, but let's go with something simple: have your suspension components serviced once a year. They will last a long time and work like they're supposed to. And it will be good.

Speaking of which, the other week I got the chance to work on a fork that you don't see a lot of around here. One of our customers brought in a Rock Shox Lyrik complete with Mission Control damping and 2-step (travel-adjust) air spring! With the twist of a knob this big boy goes from 160mm of travel (for descending) to 115mm (for climbing), and back. Think of it as Rock Shox's version of the Fox TALAS fork. Check it out: 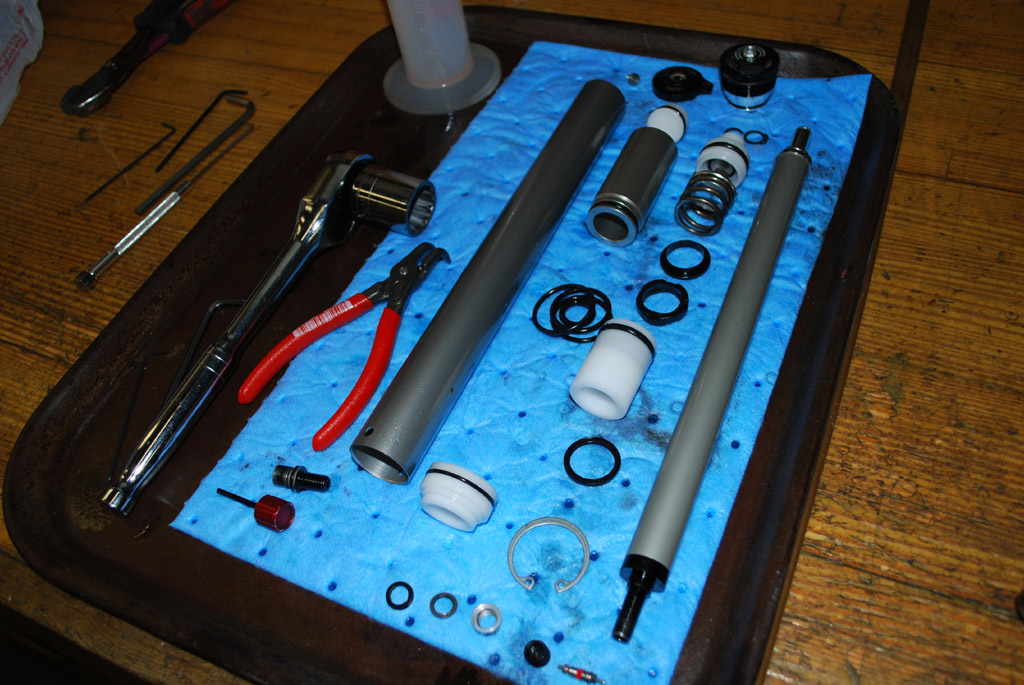 ...and that's just the air-spring side! On the damper side we have separate low- and high-speed compression adjustment and position-sensitive rebound damping. Fun stuff.